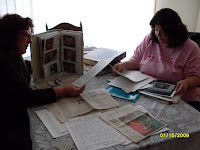 This is Belinda Puchajda and Barb Davis. They are looking at Barb's file on her cousin, Louise Davis. Most of our families have actual, literal files on their murdered loved ones. This file can have any number of different things in it. Barb's has newspaper clippings and documents, and pictures of Louise from happier times.For Barb it is uncountable how many times she has gotten this file out and studied it. Somewhere out there, in or around the city of East Liverpool, may very well be the body of Louise Davis. There are rumors. Her body could be in the Grimms Bridge area. Or, on the infamous Alpha Street, either in a well or buried somewhere up in the woods. Each time Barb looks at her file, she tries to figure out where Louise might be. She has information on the Debbie Taylor triple murder case that she also studies, looking for something in the killer's statement for a clue as to what might have happened to Louise. Sadly, she has been doing this for 30 years now. Louise disappeared in 1979. Four days after Louise disappeared, the same man she was last seen with, Robert Wooten, murdered a woman named Debbie Taylor and two of her three little children. With those grisly murders occurring so soon after Louise disappearance, the importance and significance of it was lost. For years, the police insisted that Louise just ran away especially since A. she had done so before, and B. Robert Wooten said he helped her to do so). Never mind that the person she left her house with, Robert Wooten, murdered three people four days later (including two little children!). Never mind that one year later, thanks to an anonymous tip given to police they found the very clothes that Louise was last seen in, in the basement of the house that Robert Wooten was living in at the time. Shockingly, the police still maintained that Louise ran away, even after that. But please remember that this occurred in the early 80's, before our children were a priority by the police. It took the murder of a little boy named Adam Walsh to get this country to wake up (and then only by the determination of Adam's father, John Walsh) and start protecting our children. Louise never got that consideration. But she never came home. She never called. On June 21, 1979 she just ceased to exist. Perhaps the biggest loss of all, again and unfortunately by the police, was when they burned the clothes that they found in the basement of Wooten's home. They truly felt she just ran away. They did not know about DNA evidence at the time. How different might things be now if they just would have kept them? Or at least offered them back to the family. Like I said, the family members of these murdered people keep files of their own. On February 17, 2009, Robert Wooten is up for a parole hearing. It will be his third one. How can anyone even consider letting this man loose? He killed a four year old little girl and a six year old little boy with a lead pipe, beating them to death. You would think three life sentences would mean at least one would be served. As for Louise's cousin Barb, her sister Rachel, and the rest of her family, they will continue to fight for her. They will continue to look for her. They will always love her.
You can bet that the CCFHV will be out there this year looking for Louise and keeping her name out there. If you know anything, please call the Sheriff's department. Make 2009 the year we find Louise.
Posted by Belinda Puchajda at 11:52 PM

As I'm sure most of the other family members have gone through many of the same things we as Louises family have, it still bothers me that first of all the police really need to Start LISTENING to the family when these things happen! We Know the people we Love! We Know what they would or Wouldn't do! The SIMPLE FACT that we told them Louise Did Not runaway before and she Didn't then should have been enough for them to look further!!!! Everyone who knew Louise at the time,from her parents, sister, brother, aunts, uncles, cousins, friends, even neighbors told the police Louise would not have runaway. Why is it that No One wsnts to Listen to the families? Had they Listened then Wooty could have been questioned and maybe he would have spoken, given us the location he put her, thinking he would have gotten a lighter sentince.
It's really water under the bridge for our family now. None of us can go back and fix what happened then but if our story helps another family not to have to go through 30 years with unanswered questions then I guess it's worth it. I understand The Police are busy and often understaffed and overworked. I have great respect for those in recent years who have tried to help with Louises case even though they had nothing to do it 30 years ago but they too can learn from this PLEASE LISTEN to the Family members. We Really do know our Loved ones better than you do!!!!
Belinda and Kim, Again, WE Thank You and are all very greatfull for all you are trying to do to help find Louise and we are willing to help with whatever we can.
With Lots of Love,
Barb Davis

Many folks are listening Barb, Belinda and Kim isn't.

Has anyone searched the well on Alpha St? If not why? If so, what was the result?

If many folks are listening, where were they ten years ago or five years ago? I don't see their butts out at Rogers Sale or at any function we do to get Louise's story out there. I just see Belinda, me, and usually Barb herself. So, if you are listening, great. Now, what are you going to do about it?