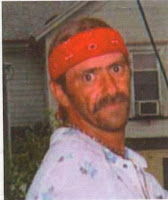 Last year, as we traveled the public domain of Columbiana County, one of the things we picked up on was the popularity of Gene Lysle. Gene has been missing since June 13, 2004. He had gone to a concert at Star Lake Amphitheater and never returned home. At every event we went to there were no less than a dozen people who either knew him or had seen him before. They would look at his picture and say "I know that guy!" Or "I have seen him before." Or "He looks so familiar."
We discovered he had many friends. While not all aspects of his life were stellar, he was generally well liked in his community. He was a nice person. Something happened to him. He never went this long without contacting someone in his family. He was close to his mom. She fears the worst.
Gene has family that loves and cares about him. They worry about him and want to know what happened. We were given lots of ideas on where to look for him. He is one of the most well known cases we have. If he was murdered, his family needs to know where he is so they have closure in their lives. For the families, life doesn't go on. Murder disrupts their lives permanently. Everything stops until there is justice for their loved one. For too many in this county, that has yet to happen.
Gene Lysle is out there somewhere. He is considered a Missing-Endangered Adult. If you have any information that might help Gene's mom have some peace, please contact the Wellsville Police Department.
Posted by Belinda Puchajda at 10:19 AM

Thank you.I don't have enough words to express how much it means to all of us as Gene's family to know others are still asking the same questions that we can't get answers to.

I saw this man at the Lynard Skynard concert. He was with a very heavy set blond woman and a skinny man. He was carrying a portable oxygen machine and he was one of the first ones thru the gates this day and he sat at the top of the lawn. That was the last time I saw him, and I did not keep track of him thru the night. He just caught my eye because he was a younger man with an oxygen machine. I hope this is of some help.

Gene did have breathing problems but he only used inhalers.Thank you for taking the time to comment.