CALCUTTA HAS HAD ONE MURDER-AND IT IS UNSOLVED! 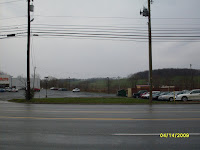 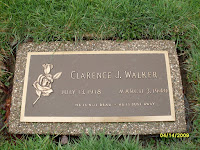 Clarence J. Walker(also known as Itchy, though I do not know why) was born on July 13, 1918. He lived in East Liverpool and when he grew up, he worked in a pottery. On March 3, 1940, at the Tropical Gardens Road House and Dance Hall in Calcutta, he was out for a night of fun and dancing. He was interested in a young woman there and in fact, asked her to dance. She declined, saying she was dating a member of the orchestra that was playing there that night. Later in the evening, as this couple walked to their car, Clarence was waiting for them and a fight broke out. The fight turned into something of a brawl in the parking lot. The melee broke up and for a few moments everyone left. But Clarence returned a few minutes later, declaring his fists had not yet had enough and the fight erupted one more. During the second fight, Clarence Walker was stabbed in the abdomen, hitting an artery and his liver, and he died later that night. It was never determined who killed him. In the pictures above, to the right, I believe, may be the spot that was the Tropical Garden Dance Hall. When I was younger, there was an old building in this area that my parents always told me had been a bar at one time and someone had been murdered there. I do not know for certain if this is the area. If any one out there knows for sure where it happened, please email me.
The picture on the left is the gravestone of Mr. Walker. He is buried in the Columbiana County Memorial Cemetery (the one with the big cross right here in Calcutta). That makes at least three unsolved murder victims buried there. Mike Williams murdered on August 30, 2005, and Dalton Springer, murdered November 17, 2000.

Wendy's is there now, near the spot that Clarence lost his life. That some one got away with his murder and it is 70 years later is depressing for the anyone involved with the CCFHV.
Are our families going to have to deal with this reality as well? That is what we are fighting to prevent.
Posted by Belinda Puchajda at 10:15 PM