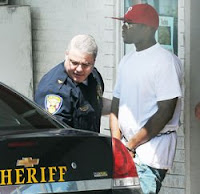 
Article Photos
Leetonia Police Chief John Soldano escorts an unidentified man to a cruiser during a drug raid at the Leetonia Shell Station on Columbia Street Tuesday morning. Members of the U.S. Drug Enforcement Administration (DEA), Columbiana County Drug Task Force and Leetonia Police Department seized in excess of 300 OxyContin pills and half an ounce of heroin and arrested two individuals during the raid. At least three more arrests are anticipated. Names of those arrested were withheld. (Salem News photo by Patti Schaeffer)

Agents seized in excess of 300 OxyContin pills and half an ounce of heroin in the drug raid. One individual was taken into custody, but has not yet been charged, and another was cited with possession of marijuana and released. An additional three arrests, at the least, are anticipated, with charges ranging from possession to trafficking. Names of the suspects were not released, but DEA Special Agent Erik Kochanowski intimated that at least one is related to the business.

Although transactions occurred at the station, Kochanowski said that the drugs' origin was Youngstown and is part of a larger organization covering Columbiana, Mahoning and Trumbull counties. He also noted that all impending arrests will be on the distribution level.

Through the efforts of a Leetonia police officer on the drug task force, the business was identified

and surveillanced prior to the pre-planned raid, offering validation for a Leetonia officer on the task force, according to Leetonia Chief John Soldano.

"We are aware that there is a drug problem in Leetonia," he said. "There are no boundaries... and I want residents to know that we are working hand-in-hand with the DEA and drug task force to battle illegal drugs in our village. What you saw today you will see more of. We will not stop the fight; this is just the beginning."

The business, owned by Nihayah Amad "Moe" Esmail of Youngstown, opened in March, and Soldano expressed disappointment that it is involved in such activity.

"It's unfortunate that a new business is caught up in this," he said. "It's certainly a bad situation being new and all the work they put into it."

In March 2008, Esmail received $40,000 from the Columbiana County Community Improvement Corporation, a government group which lends money from the county to start-up businesses.

Esmail also stated in a Salem News article published in March regarding the business' opening that he "decided to move to Leetonia (from Youngstown) because the neighborhood in which his store was located was becoming too violent and dominated by crime."

Kochanowski said he is unsure if the business will remain open, but noted that the DEA will not be closing it. A call to the business went unanswered.

Kevin Howell can be reached at khowell@salemnews.net
Posted by Belinda Puchajda at 10:57 AM