The Rest Of Our Fair Days 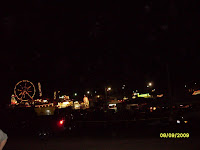 This years Columbiana County Fair was the best!! One of our favorite scenes was the rides at night. 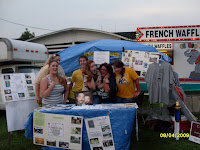 Then there was the glamour of it all. Our beautiful volunteers pose with Belinda to encourage people to stop and have a look at some of our stories. All in fun, these guys worked very hard most of the week, giving Belinda and I a much needed break. 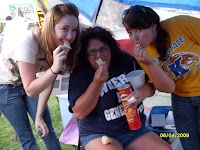 Then there was the infamous Pringles incident. No one knows for sure what happened to them, but I have a good idea. 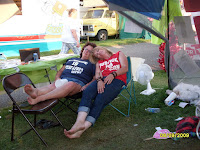 By Sunday night, Belinda and I were exhausted. Fourteen hour days took their toll on our nerves, but we actually made it through the entire week. A long but successful week for CCFHV. 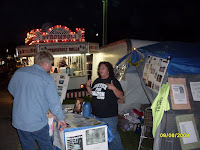 Again and again we told the stories of the 28 victims on our list whose murders are unsolved. Sometimes that is hard because some of the stories are easy to picture and remain vivid even now. 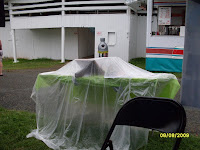 Saturday was a lot of rain to deal with. A few times it poured and we considered leaving. But we stuck it out and it cleared up by the end of the evening. And honestly, it was way better than the 90 plus degrees we had on Sunday. In our tent, we cooked. 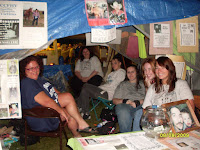 Our tent was often packed with volunteers. Last year we attempted to have family members come out but it has proven to be too difficult on them. I don't know where Belinda gets her strength. 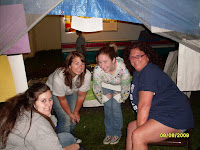 All I know for sure is being on the midway really made a difference. We talked to thousands of people this week. It was fun and exciting. 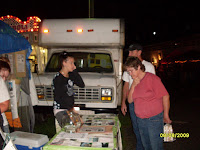 And we got the word out. The best thing we heard the entire time was Thank You. It was worth seven days, fourteen hours a day. It was a great week.
Look for our next event to be the Balloon Launch on August 28 at 1pm at the gazebo across from the court house in Lisbon. I think a lot of people will be there. We hope to see you there!!
Sincerely,

The fair was a blast with you guys!