Sherrill Continues To Search For Her Son, Gene Lysle 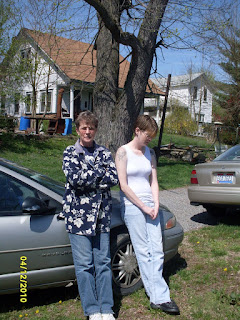 We are spending some time working on the story of Gene Lysle for the next few weeks.  He is the focus this year for our Missing Persons Vigil on June 13 in Wellsville, Ohio.  We will, of course, be doing stories about Louise Davis and Tracy Hill also, but Wellsville was chosen as the sight for our vigil this year because that is where Gene is from.
In this first picture you see Sherrill Jackson (Gene's mom) and Mary Jackson (Gene's sister).  They stand before the house Gene was living in before he disappeared. 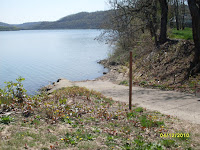 I was quite familiar with this area because I had been here before.  Gene lived right beside the place where 14 year old Frank Daniels was found in 1974, tortured and drowned. 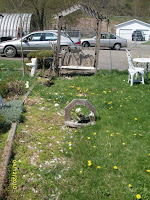 We spent over an hour talking with Sherrill and Mary about their life without Gene in it.  "That was a job for Gene."  she said when she talked about shoveling the heavy snow off her gutters this past winter.  He was her handy man around the house.  Sherrill showed me a picture of her front yard.  Gene had helped her do much of it, including laying the white stone, which is now almost grown over with time.
Mary said she and her brother worked together for 6 years at the same place.   It was painfully obvious that both of these ladies truly missed Gene. 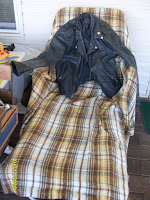 Sherrill had Gene's leather jacket laid out on the lounge on her porch.  She said he loved this jacket.  She also talked about how he would sometimes sleep on this old lounge and how, now, she sits on it with her grandchildren to read books or play.
It has been almost 6 years since Gene disappeared.  Sherrill has walked roads, searched towns, even found herself in areas that scared her in an attempt to find her son.  She has had tee shirts made with his picture on it. 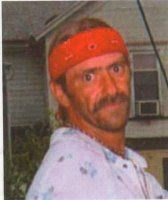 Here is a link to the video CCFHV has done about her search for Gene:
A Mother's Search For Her Son

Our vigil is on June 13 at the Gazeebo in Wellsville, Ohio.  CCFHV has asked the commissioners of Columbiana County to make June Missing Person's Awareness Month because our three from this county all went missing in June.  I hope they decide to do this.  Please make plans to attend this vigil and lend your support to these three brave families as they continue their search for their loved ones.
Posted by Belinda Puchajda at 10:07 AM

Thanks Kim for all your support.I know God doesn't give us more than we can handle. It sure does help to have CCFHV,friends and family to talk to.Love you all.