The Question Remains...Why Has No One Ever Been Charged With Dalton Springers' Death???? 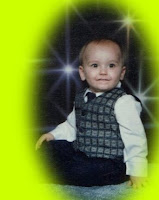 This story in the paper this morning brings me right back to my point in the Dalton Springer case. Why has no one EVER been charged in this case? Someone was responsible for that poor little 3 year old boys death!!

LISBON - A man charged in the death of his 15-month-old nephew pled guilty Monday to involuntary manslaughter and endangering children, although he didn't appear to agree with what the prosecutor said the evidence would have shown.

McNicol told the court that on Dec. 16, 2007, Courtney was caring for his nephew, Landon, at his girlfriend's residence on South Market Street in East Palestine. He was the sole caretaker at that time when the child became unresponsive and he called for help. According to McNicol, the Summit County Coroner's Office said the child suffered head injuries consistent with being shaken and striking a blunt object.

When asked by Pike if that was what happened, Courtney disagreed, but said he was still pleading guilty.

Later, McNicol said no one else was home at the time to see what happened. Following his arrest, he said Courtney claimed nothing had happened, but then altered his statement later claiming he fell down steps while holding the child. McNicol, though, said the coroner's office found that the injuries were not consistent with a fall as described by the defendant.

She and her mother both raised questions about Courtney's girlfriend, who had been caring for the child at her residence. The child lived with her even though Heather had custody. Heather explained that she has three other children, but Landon had a brain disorder which affected the mobility on his right side and he had to go to physical therapy five days per week.

She had no vehicle and her mother was working all the time, so an arrangement was made for the girlfriend to take him. Heather and her mother also claimed there were signs of possible abuse previous to Landon's death, but the signs weren't recognized until after he was gone.

"When this happened, everything clicked," Clunen said.

In answer to their claims, McNicol said the girlfriend was at work in North Lima when the incident occurred and the coroner's office finding was very clear that the onset of symptoms that something was wrong occurred immediately after the injury.

McNicol said there was "no evidence that she was at all involved with the infliction of injuries."

Courtney had been out of prison about a month when the incident occurred. He had been sentenced to two years in prison on May 22, 2006 for robbery, a second-degree felony, related to the assault and robbery of a pizza delivery driver in Salem on Nov. 16, 2005. He had originally been indicted for aggravated robbery, a first-degree felony, for the assault on West 13th Street.

Documents said he and his co-defendants robbed the pizza delivery man of $40, hit him in the head, knocked him to the ground and kicked him, causing a broken nose and orbital fracture. Courtney received credit for time served in the county jail, leading to his release from prison in November 2007.

Posted by Belinda Puchajda at 10:15 AM