Where is Louise Davis?

This is Louise Davis. She lived in East Liverpool, Ohio. On June 21, 1979 she was laying out in her back yard when an old friend drove up. He told her he had gotten back together with his wife, Darla, and she wanted to see Louise. Happily, Louise ran into to her house and told her mom about it. She said she was going with her friend and would be back at about 7:30. Her family watched her get into his car and waved as they drove away. They never saw her again.
The friend she drove away with was this man, Robert Wooten. His story was very different. He

said he was helping her to run away. He said she had a suitcase stashed in the woods below her house. He said he picked her up and took her.....

here. This was a bus station thirty years ago. It is now the East Liverpool Street Department. It is also not one mile from......

the house that Louise was living in. On the day she disappeared she left behind all of her possessions. The family has no idea what suitcase Mr. Wooten was talking about. She left behind $300 in cash. But most puzzling of all, she disappeared just two weeks before a grave stone was to be put in over her baby daughters grave. It was a stone that she worked two jobs to pay for. She was so happy that she was able to mark her daughter Linda's final resting place. But she never got to see it.
And then, to the horror of an entire city, a woman named Debbie Taylor was murdered just four days after Louise went missing. It was June 25, 1979. Not only was Debbie murdered (beaten

to death) but so was two of her three children. Jesse was her six year old son and Billie Jo was her four year old daughter. Both were also beaten to death.

This empty lot is the site of the home they once shared. The house is long gone, even down to the stairs leading up to their home. And their murderer? Robert Wooten. He is now serving three consecutive life sentences for this horrific crime. However, on February 17, 2009 he is due for his third parole hearing. This monster could get out of jail.
This is the house that Mr. Wooten lived in at the time of the murders. In 1980

a tip was received that lead police to the basement of this home where they found, stuffed in a paper bag the clothes that Louise was last seen in. Unfortunately the police, despite this evidence, still believed Mr. Wooten's story about Louise running away. A few years later these clothes that were found in the basement of the home that Wooten had lived in at the time of the crimes he committed, were burned. No one knew that there would be something someday called DNA testing.
Louise's family found themselves on their own. They searched valiantly for her

body any where that rumors lead them. Like up in the woods across from Grimms Bridge. They brought a shovel here and dug for her themselves. 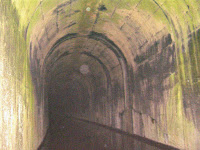 To this day they wonder if her body ended up deep in the back of this tunnel hidden away forever.

Which brings us back to the infamous Alpha Street. It is rumored that her body is here, perhaps in a well or buried up in the woods somewhere.
Today Louise would be 47 years old. She never once has contacted her family. Her parents died never knowing what happened to their beloved daughter. Where is Louise? What happened to her? She is out there somewhere. Please help her family to find her. It's about time she was laid to rest beside her parents and her little daughter Linda. It's about time her family had some peace.
Posted by Belinda Puchajda at 10:58 PM

I was Very Young at the time i was 4 years old I lived on that street up in eastend.. alpha st.. My Father allways said if we were ever caught up bye that well we were in trouble. I Wish my father was still liveing .. maybe he could help but i herd that her body was in that well the police were going to dig there but some old man stoped them . I say they Go Back on ALpha and dig were that well is.

I just wanted to say thank you for bringing attention to my sister. Its seems that nobody really cares about what happened to her and its nice to see that someone is still thinking about her and I just wanted you to know how much that means to me. If you need me for anything my email address is rachellynn3399@yahoo.com.

this is a wonderful thing that you are doing here, my cousin rachel davis is her sister and i have seen first hand that what not knowing where her sisters body is is doing to rachel, me myself i never knew louise, but from what i hear she was a good person and her family loved her deeply and still do, its sad to think that my aunt lou and uncle lester passed away not knowing where she is or what had happened to her, altho i am sure that they kind of suspected what had happened and the man that was responsible is in prison now, and hopefully he never gets out. as for rachel and her family they have never given up hope as to finding her body somewhere...i have seen rachel break down and cry for hours and have heard her tell me dreams that she has had about her sister, i just hope that if someone out there knows something to please if they have any heart at all to let someone know something anything that would lead them to the finding of louise, help the rest of her family get the closure that they need. even annonymous tips would be helpful...if you know anything please e-mail rachel at rachellynn3399@yahoo.com, thanks