This deserves to be repeated!! 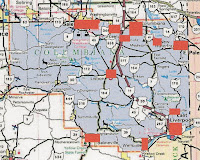 Okay Folks, Sheriff Ray Stone is trying his best to do his part. Now we all need to do our part.
The safety of our county is clearly not a priority to the "Powers that be."
we all need to get on board with this issue and write Letters to the editor, write to your County Commissioners, write to anyone that will listen.
We cannot sit back and longer and hope that this situation improves on its own.
The CCFHV has complained, the Sheriff has complained, and no one seems to be listening! I have once again included a map of our county. The red area are areas that have their own police departments. All of the other areas are patrolled by our Sheriff's Department. 2 deputies on duty for the entire county most shifts.
Together, we can make a difference! The time has come to get involved!!

WELLSVILLE The new sheriff in town doesn't care if he gets re-elected, so much, as long as his first term in office results in a safer place for Columbiana County residents to live.

Speaking Thursday to the Wellsville Area Chamber of Commerce, Sheriff Ray Stone said that while he would like to be in office eight years (two terms), if he isn't, the department will be a better place when he leaves due to changes he has made and others he believes need attention.

"I will change everything I can. I'm not here to make friends but to make Columbiana County a safer place, the whole county, not just pockets."

In a candid talk to the chamber, Stone said he has already come up against the union since he was elected to replace Sheriff Dave Smith.

The veteran officer, who had served as Perry Township police chief prior to his election, said he is not allowed to patrol or transport prisoners, due to the union contract governing his deputies, although he can arrest suspects.

"I'm trying to get it changed so I can do my job. I've been there five months and had six grievances filed against me. I 'might as well get used to it,' I was told," Stone said matter-of-factly.

With 19 full-time deputies, the department needs more manpower, according to Stone, who said, "I will argue until I'm out of office that we're understaffed."

The union contract prohibits the use of part-time deputies.

During the afternoon shift, two to three deputies are on duty, while only two serve the entire county during the midnight shift, Stone reported.

He gave an outline of some of the department's duties, including serving warrants, subpoenas, and foreclosures, in addition to criminal investigations and answering complaints throughout the county's 532 square miles.

Currently, the sheriff's office is behind in all its work due to the lack of manpower to do it, he said.

The department's 2008 budget was $2.3 million, and Stone said he received the same amount this year even though a 3.5 percent raise for deputies cost an additional $85,000, coupled with other expenses that will cut $118,000 from last year's revenue. Stone predicted he will have to lay off someone by year's end unless additional income is found.

Working for the county is quite a change from his job as Perry Township chief. Saying the township was "pretty wealthy," Stone said, "We got almost everything we wanted. The county is a different ball of wax. I'm told every day we don't have the money."

Since taking over, Stone has made some changes in the computerized reporting system that requires less time for deputies to be in the office writing reports, giving them more time on the road, but he said he does plan to bring a deputy off the road to work in the detective division, likening it to "robbing Peter to pay Paul."

He told the group he would "apologize up front" to those who might live in outlying areas, such as Yellow Creek Township, saying, "You might have to wait a long time for a deputy."

While never experiencing it himself, Stone said he "can't imagine" how his deputies can drive from one end of the county to the other on an emergency call and still have their wits about them to handle whatever waits at the other end.

"It's a long drive on some of these roads," he said.

Stone said while his department is "way behind in law enforcement," he plans to "fight tooth and nail, whether it takes grants or whatever" to change that.

"I cross my fingers every day for any kind of funding," he said, adding he needs $13,000 as a matching share for a $40,000 grant and said he plans to take that amount out of his budget.

Posted by Belinda Puchajda at 10:54 AM

When are you putting on the Springer interview?

We have taken this interview with Tiffini very seriously. We do not want to mess up the investigation into Daltons death in any way, nor do we want to cause Tiffini any more problems than she has already had. Within the next few days this interview will be done and we can put it on the blog, so please be patient a little longer.