Unsolved Murders From The Past 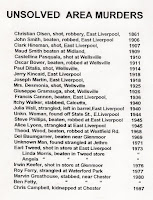 We had the opportunity to meet a wonderful man named Glen Waight in May of 2008. We talked for over an hour about the unsolved murders in Columbiana County, which turned out to be something that greatly interested him. Of course any history about the area had his attention, from what we could see. He gave us the list above that goes clear back to 1861 of unsolved murders in and around the East Liverpool area. Honestly, most of these cases we never heard of, and obviously, most will never be solved. How many of the names on our list today will be there 100 years from now? At CCFHV, we are working to make sure it is 0.
Interestingly, there are 4 names to add to the ones we already have for Hancock County. Look for that list to be on here soon. While we tried to keep it here in this county, we are starting to get more and more cases from other counties, close to ours that we can help, too. It was pointed out to us by a friend that two names on our list are not actually in Columbiana County. Tim Cline's body was found in Fairfield County on the Hocking River and that was our bad for not catching that. And then, James Brenneman was found in the Ohio River and his case is with Hancock County also. Christopher Joy Jr. was murdered in Jefferson County, but we have been telling you that from the beginning. We made sure to point that one out.
Why did they end up on our list? Because we are Columbiana County FAMILIES Of Homicide Victims. Their families live in this county. Christopher's family lives in Wellsville as does Tim Cline's. And James Brenneman's family lives near Calcutta. James lived in the East Liverpool area when he was murdered.
We are aware of some of the complaints about our list and we are striving to fix the problem. Even if you take off the three mentioned, there are still 25 unsolved murders in Columbiana County to deal with. We have also been questioned about Tyler Unkefer being on the list. It is only because no ruling has been made on his case at this time. Once a ruling is made, that will determine if his name stays on our list. I know some do not like it, given the circumstances, but it is his family we are concerned with who suffer and deal with it every day. They need closure the same as anyone else. Remember, we are about the families. All the families. Everyone hurts in murder, on both sides of the fence.
The longer we do this, the more we learn. We are not perfect, but we are honing our skills. Expect some changes coming soon. We can admit when we make mistakes. And we will fix them.
Posted by Belinda Puchajda at 11:31 AM

WHY WOULD ANYONE COMPLAIN ABOUT WHAT COUNTY THE VICTIMS WERE IN-THEY WERE KILLED WEREN'T THEY ANY HELP TO SOLVE THE CASES SHOULD BE ACCEPTED.WHAT IS WRONG WITH THESE PEOPLE