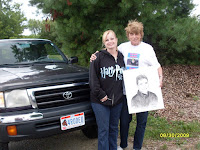 One of CCFHV's biggest supporters and a driving force behind us is Shirley Winn. Known affectionately as Aunt Char, she is active in CCFHV by lending her ideas and even, occasionally, financial support. Her driving force is finding her son's murderer. She lives in another state but does all she can through letters, phone calls and emails to keep Mike's case alive. On August 30 she set up camp by Mike's grave and invited family and friends to come and join her. This is Tabitha. She knew Mike well and is the one who bought his horses. She was the artist for the beautiful portrait that Shirley holds in her arms. Tabitha even has 4RODEO on her truck licence plates. 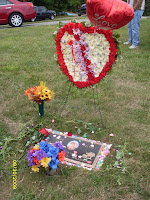 I stood with Shirley for a few moments beside Mike's grave and we quietly talked about this well loved man who was so viciously murdered and who is SO GREATLY MISSED! She talked about the little hearts that covered the ground around his headstone. She said that is all she can do now. He is gone and all she can do is spread her love around him. Love is the most powerful thing on earth and I know Shirley will never give up her fight for Justice for Mike. CCFHV stands behind her just as she stands behind us. 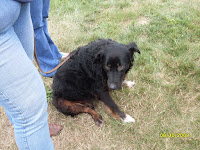 Not only did Shirley come up with the idea for the heart shaped balloons for the balloon launch and make the video that we watched, but on this day of mourning, she arraigned to have Mike's dog, Sisco, come out to his grave site with her. It was like having a little piece of him there. He was terrified, but took all the attention fairly well. His new mom, Sunni, kept a watchful eye on him so he wouldn't get too scared. Sisco may have been the last living being to see Mike besides his murderers. Sisco's presence just made it more real.
We just want you to know Shirley that we love you and all you do for us. Like you, we will never give up in our search for Mike's killer. There will be Justice For Mike. And for all the other unsolved murder victims, too.
Posted by Belinda Puchajda at 10:59 AM

Kim and Belinda
Thank you for keeping Mike's name out there to remind people that Mike was a good person and his precious life was taken by some evil persons.
I am with CCFHV every step of the way - How could I not - you are fighting for Justice for Mike and the other victims just as I am.
We just want Justice for our loved ones who were taken before their time.
THANK YOU FOR ALL YOUR HARD WORK!
Love You
(Shirley) AC