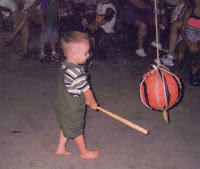 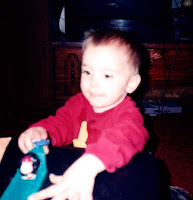 9 years ago today 3 year old Dalton Springer died. He was a sweet and caring young boy with his whole life ahead of him. 3 years ago Dalton was brutally beaten to death by someone that he trusted. You have all heard the story from this blog and if you have ever been to a CCFHV event, you know that we plaster Dalton's' story all over the place. Aside from my cousin Michael, his story has hit me the hardest. Never was a child let down more so many times by so many people in such a short time. No one protected him from harm. No one. The loving family members that tried, could not. He was beaten to death. He had a history of abuse and it was allowed to continue. To this day Dalton is still being abused. His body lays in an unmarked grave at the Memorial Cemetery below the cross not in "BabyLand" where most children are buried, but in an open field that most people don't even notice. Donations were given to at least put a candle on his grave and the permission from the family was never given to us so that we could place the candle on his little grave. He was 3. HE WAS 3!!!!! The stories that we have heard since finding out about Dalton have been horrific. A lot of finger pointing, a lot of remarks left on the blog. Look at his face....Just take a moment and LOOK at him. What on earth could this precious little boy have possibly done to deserve what was done to him? I mourn Dalton. I feel as if I knew him and I will NEVER let him be forgotten. EVER!! Do you hear me??? Do you hear what I am saying?? To whichever piece of crap that did this, I will NEVER let this go. Calling you a coward, just doesn't even seem close to fitting. It takes a really tough person to beat up on a defenseless little 3 year old. Dalton will be remembered. He is remembered everyday by those that did love him and by CCFHV. We carry his candle with us everywhere now. Dalton is part of us. Personally, I have given up all hope that he will have justice in this life but I pray that the wrath of God shows you the same kind of consideration that you showed Dalton while you were beating on him. R.I.P. Dalton and know that you were loved by the good people in your life and that you are loved by me. And to YOU...You know who you are...You..the person that took this little life...You that walk around today as if nothing has happened and YOU...who thinks that there will never be a Judgement Day...Let me tell you...YOU are so wrong!!
Posted by Belinda Puchajda at 7:42 AM

This just breaks your heart. So sooo
Sad!
How could someone hurt a baby?
Some sick twisted mind that has to live with that thought every night before they go to sleep.
Vengeance is mine saith the Lord!

So Sad R.I.P. Dalton...how could someone do something like this to a baby? and as it says god will have his judgement day..i hope he dose soon.on this peron or persons who did this.

WAY TO GO BELINDA-NO BODY COULD OF SAID IT ANY BETTER THAN YOU JUST DID.......GOD BLESS YOU...LYNN

OMG! Not only how could someone hurt this precious little boy but how in the hell did nobody get arrested and charged for this?! I am just in total shock over this story, it has made me so sick! I'm ashamed to admit knowing the family(or even thinking I did) but not knowing about this! The mother of this precious little boy NEVER mentioned even having children in the 15yrs I've known her until just recently when the oldest daughter started having contact with her! OMG! I just can't believe what I'm reading on here, I'm just in shock and sick, very sick over this.